Mir’s anger has a reason. The canal is dry these days, hampering the start of the apple season when farmers prepare the trees with minerals and fertilisers.

“It is time to give trees their first shower (of minerals and pesticides) but there’s no water,” laments Mir, pointing to the parched canal. “It will prove costly, because missing even one spray (out of approximately a dozen recommended) can ruin the whole crop.”

Agriculture is the backbone of the region’s economy, contributing 8 percent towards its GDP. According to one survey, at least 700,000 Kashmiri families are directly or indirectly connected to the agricultural sector.

Last year, about two million tonnes of apples were harvested in Indian-administered Kashmir, two-thirds of which was exported to the Indian markets.

Shopian is the region’s second-smallest district, with a cultivable area of just 312sq km (194sq miles). Yet, it reported the third-highest yield of apples and second-highest yield of cherries in 2018-2019, according to the government’s agriculture department, making it the “apple capital” of Indian-administered Kashmir.

In 2019, India scrapped the region’s semi-autonomy, bringing in developments that spelled disaster for the farmers as rules changed and outside players flooded the area.

Many irrigation canals and water channels crisscrossing the apple-rich belts of Shopian are running dry due to illegal and unabated mining of rivers.

In nearly three dozen villages of Shopian, there are complaints of water shortage, said Mohammad Yusuf Wagay, another farmer from Odura village.

“The Salar water stream feeds 12 villages and dozens of orchards but it is running dry. When we raised the issue with the administration, we were asked to shut our mouths and threatened with police cases,” he said. 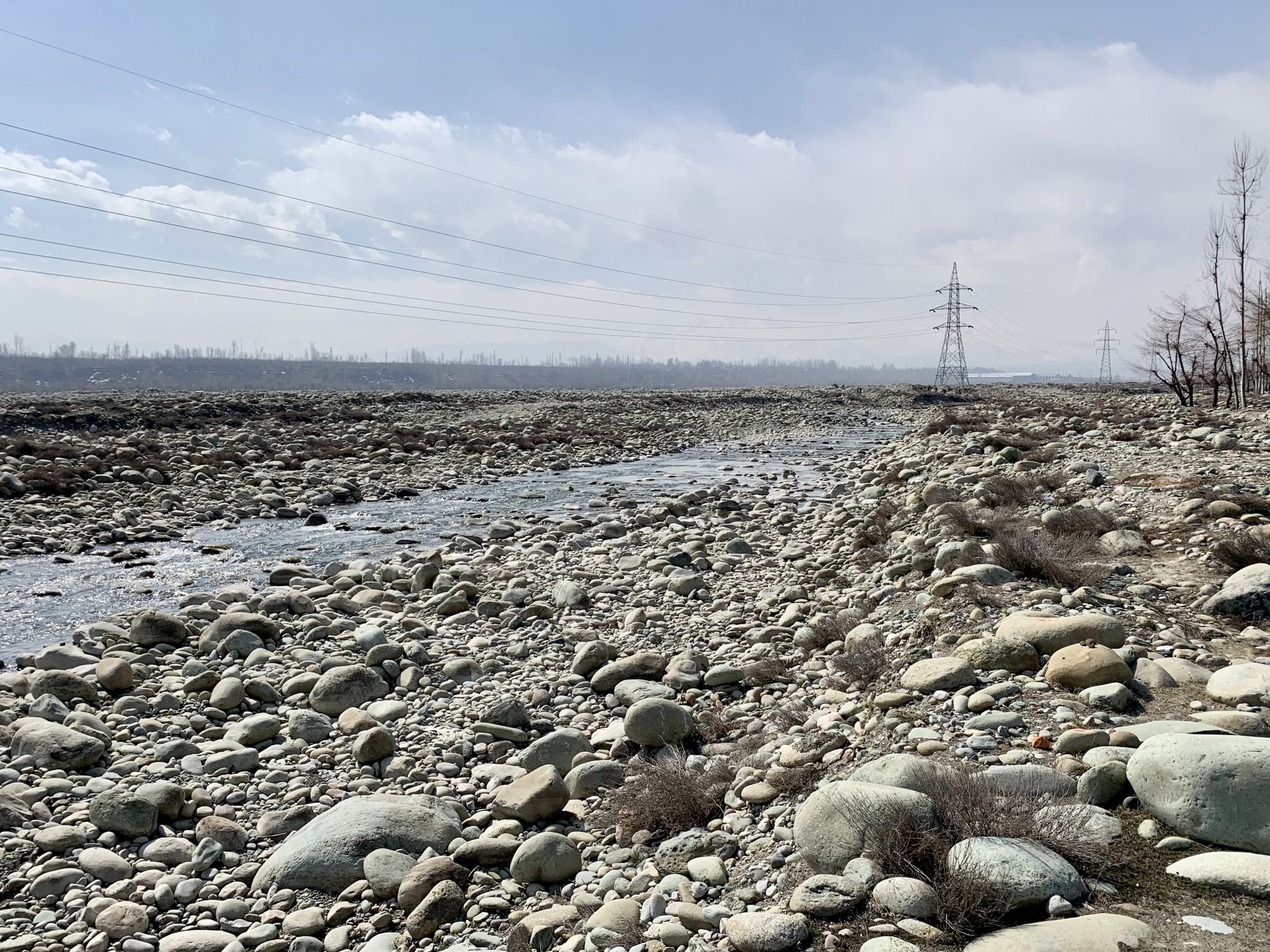 The spring melt in the snowcapped Pir Panjal Mountains in the Himalayas washes the tributaries of Rambi Ara, Romshi and Vishow in southern Kashmir before flowing into the Jhelum River, which is part of South Asia’s grand Indus river system.

Rich with exotic snow trout and mineral wealth, the “three sisters” irrigate thousands of lush apple and cherry orchards scattered on their flood-prone banks, providing a livelihood to thousands.

A government of India study carried out by the Central Power and Research Station, Pune, has warned against mining the Jhelum river or its tributaries.

However, in February last year, when the local government opened auctions for mining, the “three sisters” were identified by the government as part of the reserves, despite environmental concerns.

For 222 “blocks” – areas demarcated for mining activities – the government received 199 Letters of Interest, the first step in the auction process. Accordingly, mining plans for 180 areas were approved.

But the environmental clearance to mine was only given for 13 “blocks” in Kulgam and Kupwara districts, according to official documents.

In a year of unabated excavation, they said, the tributary’s ecosystem has been vandalised and its watercourse tampered with. 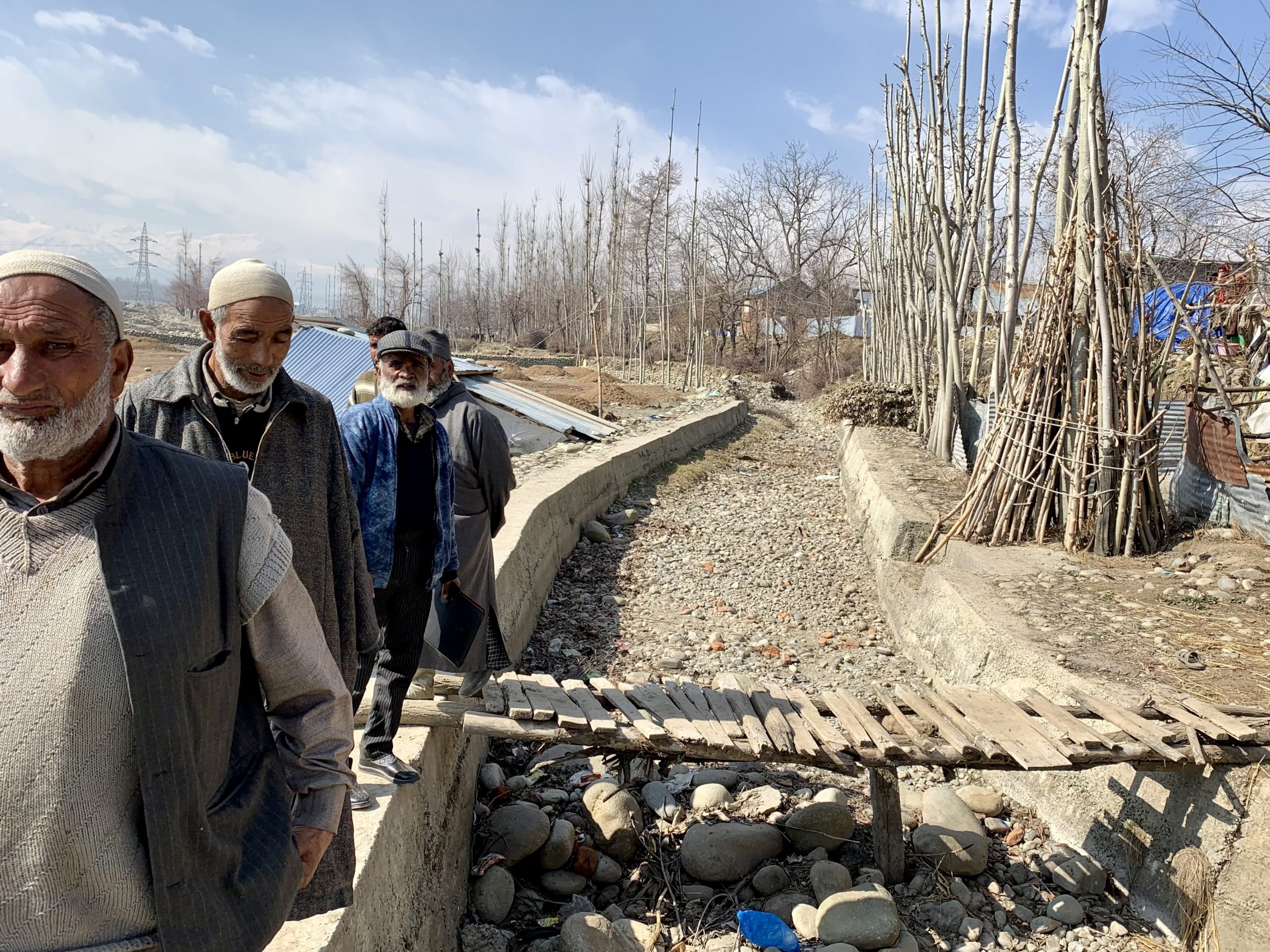 Sources in the government said roads were identified as a “priority sector” by the administration to “showcase the turnaround” in the infrastructural landscape after the region’s special status was scrapped and it was turned into a federal territory under New Delhi’s direct control.

“Roads are being constructed at three times the earlier speed. Efforts are being made to complete the power and water projects pending for years,” the disputed region’s Lieutenant Governor Manoj Sinha said earlier this month.

A source in the government told Al Jazeera much of the stone and sand used for the construction and repairs of roads across south and central Kashmir is extracted from Rambi Ara, Romshi and Vishow, while the government “turns a blind eye to this wilful vandalism of environment”.

“I can understand what is happening. We also feel we cannot become an obstacle for any project put forth by the government,” said an official in the region’s geology and mining department, requesting anonymity.

In the daytime, locals are seen in the Rambi Ara tributary with their shovels and tractors. When darkness falls, non-local contractors plough out sand and other minerals using heavy machines, leaving deep craters in the river.

“The river resembles a war zone at night,” said Ghulam Qadir Bhat, resident of Odura village and head of a local village council in Shopian. “Throughout the night, the sound of heavy earthmovers rob us of our sleep.”

The mining contracts in about 40 blocks of Rambi Ara were bagged mostly by non-locals.

Kashmiri contractors, who use local labour and carry out excavation manually, could not participate in the bidding process due to the internet shutdown – part of India’s security and communications clampdown following the scrapping of the region’s special status.

“The bidding process was illegal. Almost 85 percent of contracts were bagged by non-locals who have snatched the livelihood of thousands of workers in this belt,” said Tariq Ahmad, who heads a local union of workers in Shopian. 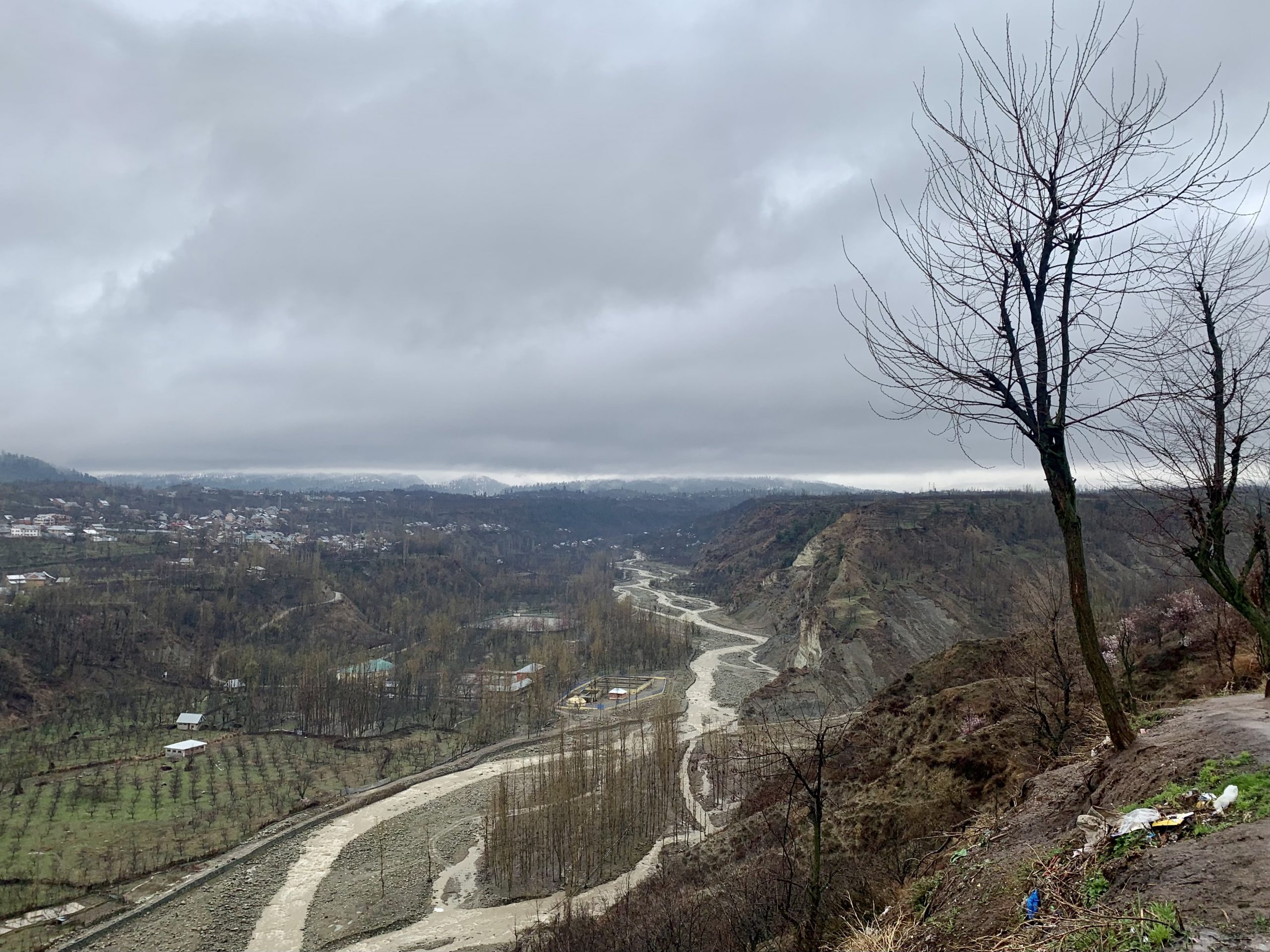 ‘Our families will starve’

“Odura is a poor village of farmers,” Mir said. “Our survival depends on our orchards. If our trees are starved of water, our families will starve as well.”

The water scarcity has triggered a wave of anxiety among ordinary residents as well as farmers, forcing them to delay spraying their crops, which can prove detrimental.

“This river is a source of livelihood for hundreds of families. Where will we go? How will we sustain our families?” said Abdul Rahim Mir, a resident of Mispora village in Shopian.

The Rambi Ara river is a source of livelihood not just for the fruit cultivators but also for young, jobless men who used to extract stones and sand from the river manually for daily wages. Many bought tractors on bank loans to help with transportation.

Showkat Qazi, a tractor owner and resident of Shopian’s Shadab Karewa area, said some 200 drivers are jobless after the mining contracts were handed to non-locals.

“Many tractor owners have graduate and postgraduate degrees. Some availed bank loans for buying tractors but the mining by non-locals has destroyed their livelihood,” he said.

According to Section 4.3 of the Jammu and Kashmir Minor Mineral Concession, Storage, Transportation of Minerals and Prevention of Illegal Mining Rules 2016, mining is forbidden in riverbeds “below the depth of 3 metres or water level, whichever is lesser”.

However, mining by heavy machines has left deep and wide craters in Rambi Ara which threaten a major power transmission tower built on the river. 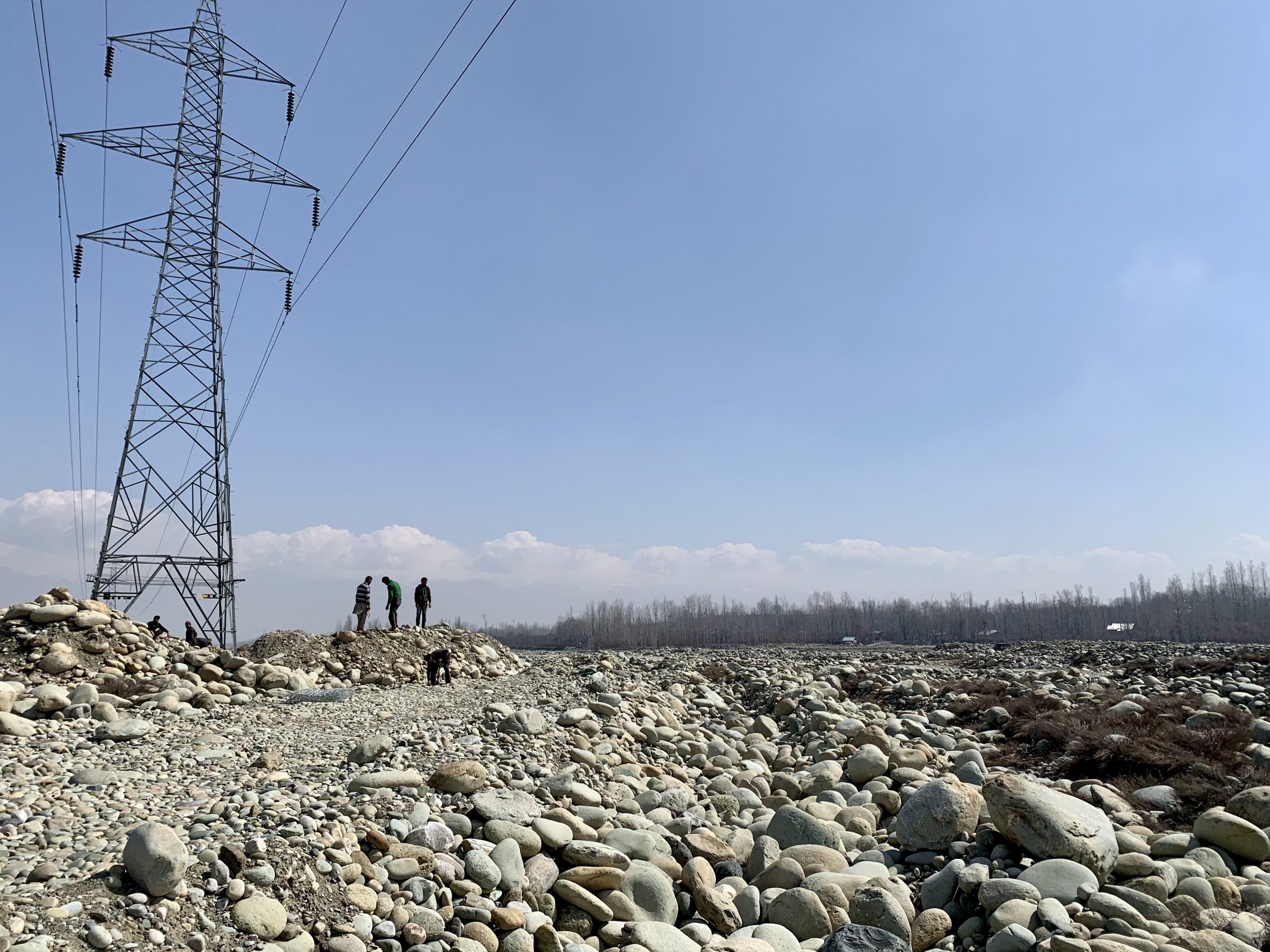 “The water which fed our orchards now flows beneath large boulders dislodged by the machines. Due to unplanned mining, it is now difficult to reach the main river,” said Abdul Rashid, a farmer in Odura village.

According to India’s National Water Policy 2012, “skewed availability of water between different regions and different people in the same region” and “unreliable water supply system” has the “potential of causing social unrest”.

“It is a broad daylight loot of our resources,” said Bhat, the village council head.

“After the Article 370 abrogation, (Prime Minister Narendra) Modi had promised ‘sabka saath, sabka vikas’ (unity and progress for all). But instead of offering jobs, unemployment has only increased. Now our basic livelihood is being snatched from us,” he added. 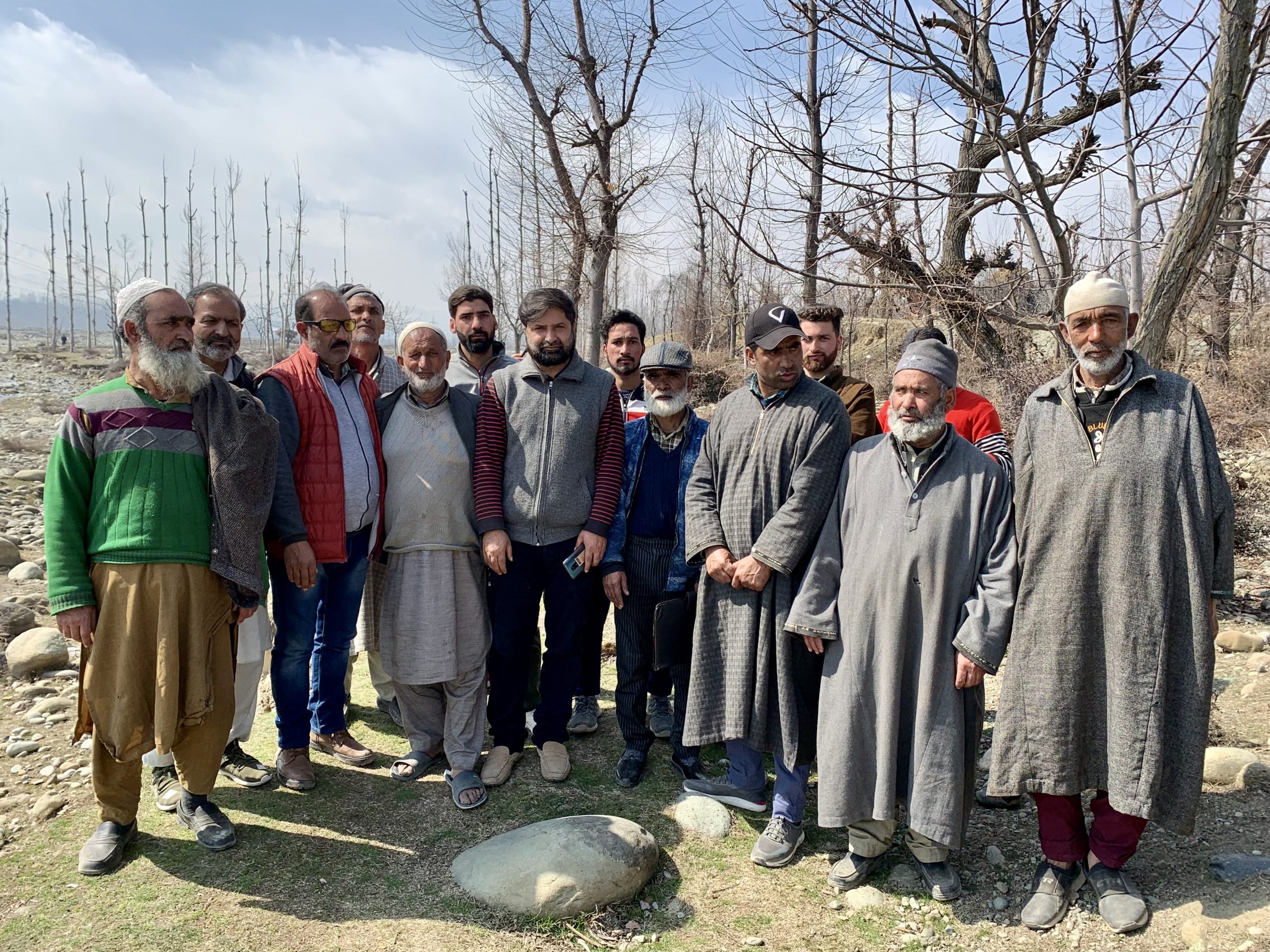 ‘Forcing us to sell our land’

After New Delhi relaxed the rules, allowing non-Kashmiris to own land in the disputed region, many farmers in Shopian, a hotbed of rebel activities, say they see a disturbing pattern in the manner in which mining has been going on.

“It is a deliberate attack on our livelihood,” said a farmer who didn’t want to be named, “The government wants to destroy our orchards and force us to sell our land. They want us to beg for alms.”

Jammu and Kashmir territory’s mining law states the licensee must work “effectively in a proper, skilful and workmanlike manner with regard to conservation of mineral and safety of labourers and surroundings”.

But the villagers allege the contractors are not concerned with the “safety of surroundings”.

Shopian’s Deputy Commissioner Sachin Kumar Vaishya told Al Jazeera there is “no clarity” about the people involved in mining the Rambi Ara.

“The situation is not good. We have seized several vehicles. I am seeking a report from the irrigation and other concerned departments on this,” he said.

“We have to strike a balance between development and environment protection.”

The statistics are alarming. In 2018, the government’s geology department filed three cases involving illegal mining in Shopian. Last year, 83 such cases were filed.

In the adjoining Pulwama district, the figures stand at 46 and 317 respectively. In 2019, 476 cases were registered in 10 Kashmir districts which jumped to 2067 cases last year.

“If there is a jump of 400 percent in illegal mining cases, you can imagine the actual situation on the ground,” the geology and mining department official, who had requested anonymity, told Al Jazeera.

Vaishya said the mining contracts have not yet been awarded. “We are finding a way out to provide them (locals) livelihood and at the same time ensure that the ecology of the river is preserved. I have met locals. We will come out with a roadmap.”

But the villagers say that, given the manner in which the excavation has been carried out, it is unlikely the government does not know what is going on.

“I have four to six men at my disposal. Whenever I get information on illegal mining, we try to stop it. Due to militant activities, we can’t come out during the night,” Majid Qazi, district mining officer in Shopian, told Al Jazeera.

“We have filed many cases against illegal miners. I was the first officer to recommend the use of Public Safety Act against them,” he said.

For the fruit growers, however, these are desperate times.

“When I objected, they complained to the district administration and I was summoned by the officers. It was only after the intervention of some locals that I was set free.”